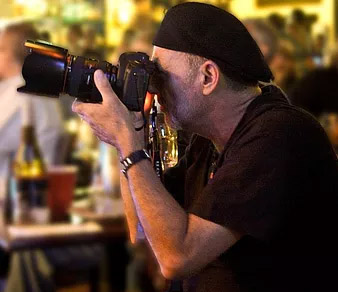 A former rock concert photographer and journalist in South Florida in the 70’s, Jay Skolnick revitalized his passion for photography and live music when his good friend, Albert Poliak, opened the Funky Biscuit in Boca Raton in 2011. It didn’t take long for Jay to become the house photographer as the Biscuit became the place to be and play, with Jay documenting it and Al filling the Biscuit walls with his pictures. Along the way Jay also shot shows for Rock Legends Photographers and contributed for SFL Music Magazine.

A chance meeting at the Biscuit with Jesse Finkelstein of Blues Radio International led to a long and wonderful association as the “photographer of record” for BRI. Jesse and Jay have done over 400 performance interviews in the BRI studio and cover the Blues Music Awards in Memphis each year.

Jay’s passion for pursuing live music and “capturing the shot” has led him to shoot at clubs, concerts, and festivals, traveling all the way to Switzerland recently for the Lucerne Blues Festival.

Finally in 2019, an opportunity came up to purchase the in print magazine, SFL Music Magazine, for which Jay had become a contributor. SFL had its origins as the magazine called Rag magazine, the publication that many live music enthusiasts used to depend on back in the day to find out about the live music scene here in South Florida. It seemed like coming full circle and Jay shared this passion with his family. Jay and his brother, Gary, had a special bond through music growing up and this opportunity has brought them even closer. They are the publishers of SFL Music Magazine now and their family works with them to produce the magazine as well.