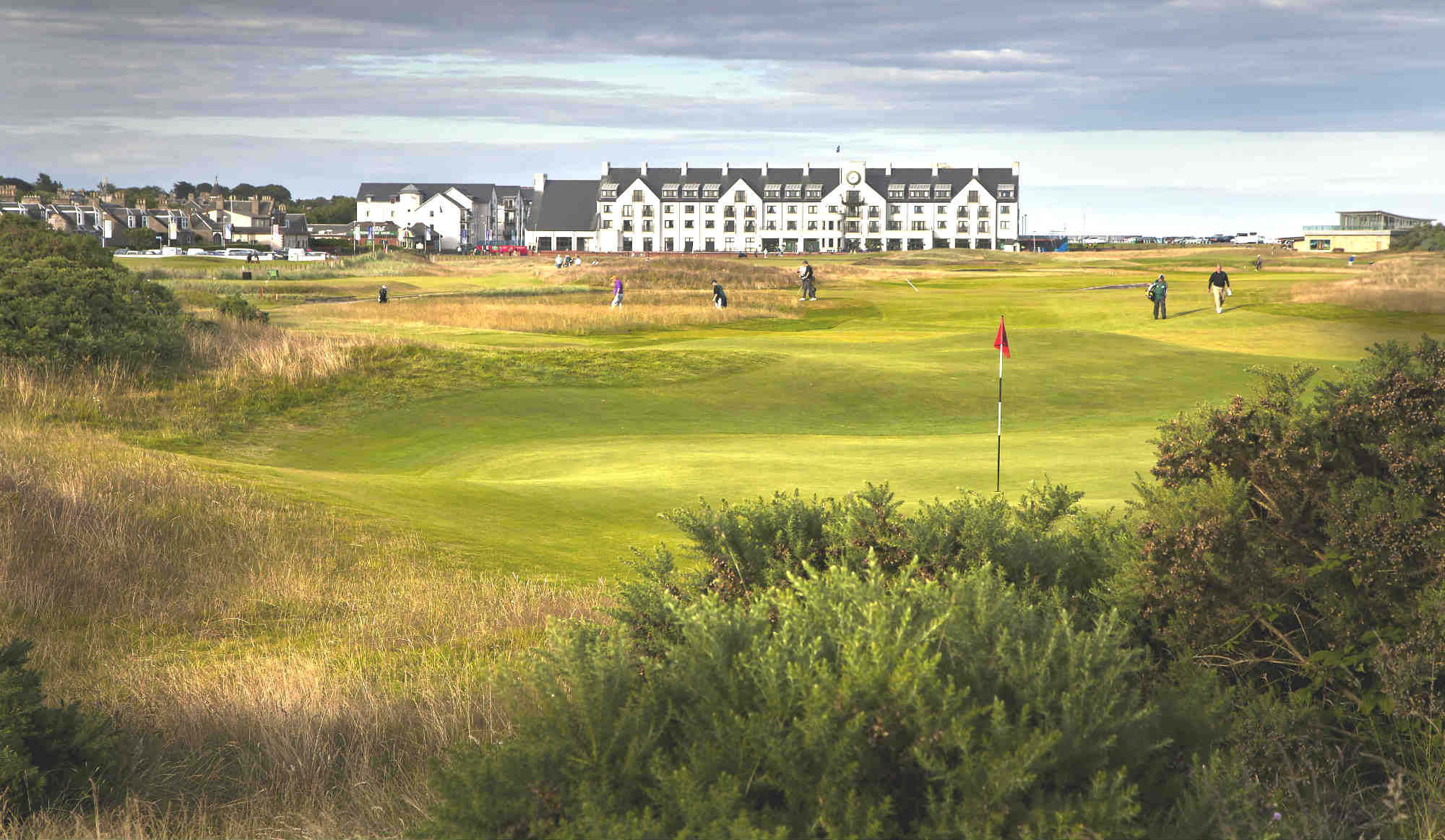 As we watched another memorable Open Championship on arguably the hardest course in the Open Rota Carnoustie, I was reminded of what it’s like to play these courses and feel what the best in the world feel when they play them in big events.

I have been organizing golf trips along with my friend Marc for years. Marc and I had been on many golf trips to great destinations and we enjoyed organizing them for our like minded friends. Taking it up a notch we joined forces and our group of golf travelers became 24 to 36 and were eager to go on our expeditions to all the great golf destinations in our country and more. We did Pebble Beach and Pinehurst and all the great courses in this country where we could play where all our heroes played in major championships.

When I got the chance to make it to the home of golf, The Old Course in St Andrews, I was in heaven. Every real lover of the game eventually has to go there. Loving the history of the game, walking the hallowed grounds where golf began, playing the game as they play across the pond, and having shots that all the great have had at British Opens we have watched on tv — it became my mission in life to bring all my friends to all those destinations where the British Opens have been played. Marc agreed and we started taking our “away we golf” golfers as we called them on “Trips of a lifetime”.

We realized that tour trips would be different than the ones tour companies plan. Our trips became Ryder Cup matches — where two teams played each for the coveted Away We Golf Cup. There would be matches just like on TV where each guy would have to rise to the occasion and make shots to help his fellow teammate and team to victory. There would be money involved too. This made the golf on these trips create a scenario where you could feel the pressure and choke or come through, the heartbreak of failing and the exhilaration of making the shot. And this would be at the courses we have seen on TV reliving epic battles that golfers know all too well – The Duel in the Sun at Turnberry between Jack Nicklaus and Tom Watson, the dominance on one Tiger Woods at more than one Open, and Bobby Jones accepting the Claret Jug and being given the key to the city and the love of the Scots for his talent and graciousness at St Andrews. These things were on my mind today as I watched the Open at Carnoustie. I love the history of the game and of Scotland and when they intersect it’s beautiful.

Carnoustie – site of an epic battle between the Vikings and the Scots as described by David Feherty during the broadcast.

The name Carnoustie probably derives from two Scandinavian nouns, “car” meaning rock and “noust” meaning “bay”. However, there is a more fanciful explanation that some local inhabitants prefer.

Those individuals will tell you that the town got its name from the Battle of Barry in 1010 in which the Scottish King, Malcolm II, repulsed a band of Danish invaders led by their general, Camus.

History suggests that the Battle of Barry was a bloody affair that raged for hours until Camus was put to the sword. To this day, a cross in the ground of the Panmure Estate marks the spot where he was buried.

Legend has it that the Norse Gods were so incensed by the loss of their favourite warrior that they put a curse on the neighbourhood, letting thousands of crows loose on Barry Sands. Soon, the crows colonised the woodland on what is now Buddon Ness, their numbers growing to such an extent that the area became known as Craw’s Nestie, later corrupted or as Feherty put it mispronounced so often that it was to become Carnoustie.

Yesterday Gary one of our golf buddies texted us at 6:30 am and let us know he was watching the Open and was so fond of the memories form our epic golf trip with the championship culminating at Carnoustie. He thanked us for creating such wonderful and lasting memories of our time there, brought to life by watching the pros show us how they hit shots there. As another of our Away we Golf golfers likes to say “when the end comes all you have is your memories, so make great memories while you can!” Oh…

And we did. However, our memories are fading so we need the great TV events to help us relive them.

We arrived at Carnoustie with our matches and the finals – the matches where each guy plays another known as the singles “mano against mano”. Marc’s team ended up in a position where the last 6 matches on the course had to be won by his team in order to retain the Cup. A pretty tough task. All the guys would gather, as was tradition, around the 18th green and watch as each match came to a close calculating whether the ultimate winning team was heading up the fairway.

More often than can be believed the matches would come down to the very last couple of golfers out on the golf course making for very dramatic finishes with our fellow teammates having a pint and cheering us on! There is nothing I can recall as fun as battling other golfers for the Champioship AWG Cup at such hallowed grounds. Of course we looked nothing like our heroes as we hit shots out of bounds, into bunkers, lost in bushes, etc. Hey wait so did they today at the Open just like us? So you the amateur golfer can experience what they experience at least somewhat. We will not talk about the falling into birns, tripping over rakes, throwing clubs, and mixing stripes and plaids – we were golfers nonetheless…

We watched today, all day, as the Open became a battle between Tiger (could he make a comeback) and Speith (could he win again) and all the other challengers while reliving our own

memorable battle at Car Nasty!.. the memories and the history …and the winner Molinari made me happy to be of Italian heritage so there was that…”first Italian to win the British Open” the headline reads. Molinari joins the greats, Lombardi, Ferrari, Marciano, DiMaggio.

I have to say that our Away We Golf matches that year at Carnoustie came down to my match and the match behind me. Marc’s team was mounting a comeback and the bets were flowing. Odds makers were recalculating as each guy on my team went down to defeat. The caddies were paying off their bets as each group came in as well. The caddies love to bet on their golfers across the pond and my team was not doing them any justice.

My friend Dr. Bob Johnson in the match behind me gave it his best and lost by the 15th hole which meant I would be the deciding match. I had been battling my opponent all day and remember the Hogan’s alley shot. This is where Ben Hogan became beloved by the Scots for his fierceness and determination. The hole is long and the landing area is very narrow and when the tournament is on the line very difficult from the tee. Hit it left, it’s out of bounds; hit it right, there is high rough and bunkers and no man’s land. Dr Schwartz, my opponent, was a tough competitor and hit it right down the middle. The landing area is very small and being aggressive to hit that area is very risky. Hogan hit the ball along the out of bounds fence and landed it perfectly into the 20 yard wide fairway and went on to win. They put a plaque there and named it Hogan’s alley. I came to the hole and did the same – well in my mind I did the same thing. I had to after Alan put it out there. I hit my shot and the wind helped and I got lucky. I am no Hogan, although I did wear a hat like his, and played his brand of irons. That is where the similarity ends…

Alan had me playing catch up all day. Every time he plodded his way along I tried something spectacular with mixed results. He had me pressing and out of my game. I tried to remember watching what my heroes did to win in the Open. Alan must have been doing the same thing. We battled back and forth, when finally I hit an errant shot on 16 and Alan didn’t falter. 17 was the hole I had to win to stay alive and with a tie Marc’s team would win the cup. I was always prone to go for the impossible in those situations and so of course I was aggressive while Alan played conservative and won the hole. It was over. However I still value the battle at Carnoustie as one of my finest matches ever played in our travel golf competitions. Carnoustie and Alan Schwartz taught me the value of playing the course and not trying to overpower it. I vowed to become a better golfer and a few years later I was a single digit golfer and won lots of matches. Alan Schwartz and I both have a soft spot for that course.

Marc’s team retained the Cup and won all the money… the bookies were happy, the favorites went down kicking, and the Guinness was flowing… But hey we made memories!

I heard a quote recently that a man is nothing more than the sum of his memories.

And today watching the real pros battle it out at the site of our Away We Golf matches, Craws Nestie in the 2018 Open our epic battle made all the more sweet by watching and remembering…